skip to main | skip to sidebar

SweetDreams -1 The pointlessness of worries

Ivan lifts his scarf up around his neck. The night is cold and clear, fit for thinking. And he has a lot to think about.

He is worried. The Defeaters’ assaults have become so frequent that he suspects they found new supporters, or worse, they formed an alliance with some potentate. This ancient and cruel war drags on since way before his birth, but now those bloody stakepinners seem to be well set up with weapons and equipment of the more expensive and advanced. If his fears were justified, things could come off worst for all of them Vampires.

The news from abroad seems to confirm his suspicions. Another den was assailed and the massacre spared no one. For this reason in the last Council he demanded an effective response, before it’s too late, even at the cost of breaking the secrecy rule that has been protecting them for centuries, hiding their existence behind folklore and low class literature. This provoked a so ferocious reprisal to swipe away the Defeaters’ local lodge and keep them off for a while. The other Councillors seem to agree, but the final say is to Ludwig, of course.

The headlights of a car stroke him shortly, when he realizes Orlando and Xavier worried him the most. They are the pack puppies, two kids initiated by Mr Big himself few weeks earlier. Curious and thoughtless, as all puppies, they hardly accept they’re not ready to hunt on their own yet, especially in such difficult times. If the Defeaters found them, they would have no escape. If they followed them up to the den, the whole pack would be exterminated. They would all be pierced by their skewers during the day sleep, unharmed, like lambs. He shudders at the thought.

He searches his pockets for a cigarette. He lights it, blocking the wind. What was Ludwig thinking, when he chose such troublemakers. He exhales the smoke. They have attitude, though. When they’re trained, they’ll make first class fighters. To tell the truth the boss rarely makes mistakes.

Wandering along desert roads he admits the real reason of his annoyance. Damn, he is a warrior and a strategist, member of the Council and Ludwig’s lieutenant. He never took advantage of his status on other Vampires, especially on new-comers. And few hours earlier, sitting in the hall with the others, he felt Xavier’s eyes stuck on him. The kid didn’t look down even when he turned to him. He held his gaze with no sign of awe. The dispute was interrupted by Amber, who sat on his lap to mend their ancient friendship, as she defined it, licking his neck.

Afterwards he stood up and left the hall. In the corridor Xavier came out of the shadows and grabbed his arm. His grip was so tight to hurt. Nevertheless he should know the fools who dared to provoke him had their chest ripped open. Anyhow, for some inexplicable reason, he stood still. For the same reason Xavier moved his hand to his hip and caressed him gently. He pushed his fingers to his pelvis, soft but steady, down to his groin, keeping on staring at him, obstinate and hungry.

«I have to go» Ivan said, after an endless time.

«I know» Xavier replied. «When you’re back come to find me»

Only then did he let him go and looked at him going away.

He is ruffled now. That handsome kid, with his sharp features made him feel things he believed lost forever. He angrily throws his stub away. He cannot allow himself such a weakness. The war is on. The stakepinners always in ambush. But he knows that if at dawn Xavier slips in his bed he will not be able to send him away. He smiles, despite himself. I’m growing soft, he thought.

Ivan has a lot to think about. That’s why he doesn’t notice the three armed shadows behind him.
Pubblicato da Giusy De Nicolo a 07:14 1 commento:

Home page
Iscriviti a: Post (Atom)
SweetDreams is a novel by Giusy De Nicolo. It's about vampires, war, love and treachery. It is a serial story, or feuilleton, if you like. 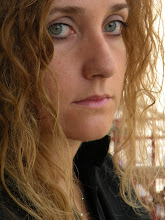